Support has been improved for the KsEditor, the official editor for Assetto Corsa tracks, through enhancements to the FBX Export plugin.

Please follow this link to notes on using the KsEditor.

Go to the downloads page for the latest version of the FBX Export Plugin.

Fixed: Crash on exit on most Windows systems.

New:  Import of F1-2014 car and track models. Please note that for the cars to be correctly textured the text “2014” must be part of the full folder name.

Enhanced: Fresnel Intensity of material is no longer restricted.

Enhanced: Progress bars for import and export of rF1/rF2 tracks.

Fixed: Display Material Filter could cause the sky and ground to be filtered out

Fixed: Multiple editing of Object Attributes would set all the selected objects to the instance name.

Fixed:. Collada Import plugin could fail if nodes had no name.

Fixed:Grid 2 cars incorrectly textured, and Dirt Tracks objects all at 0,0,0.

New plugins are available to allow the export and import of FBX files. 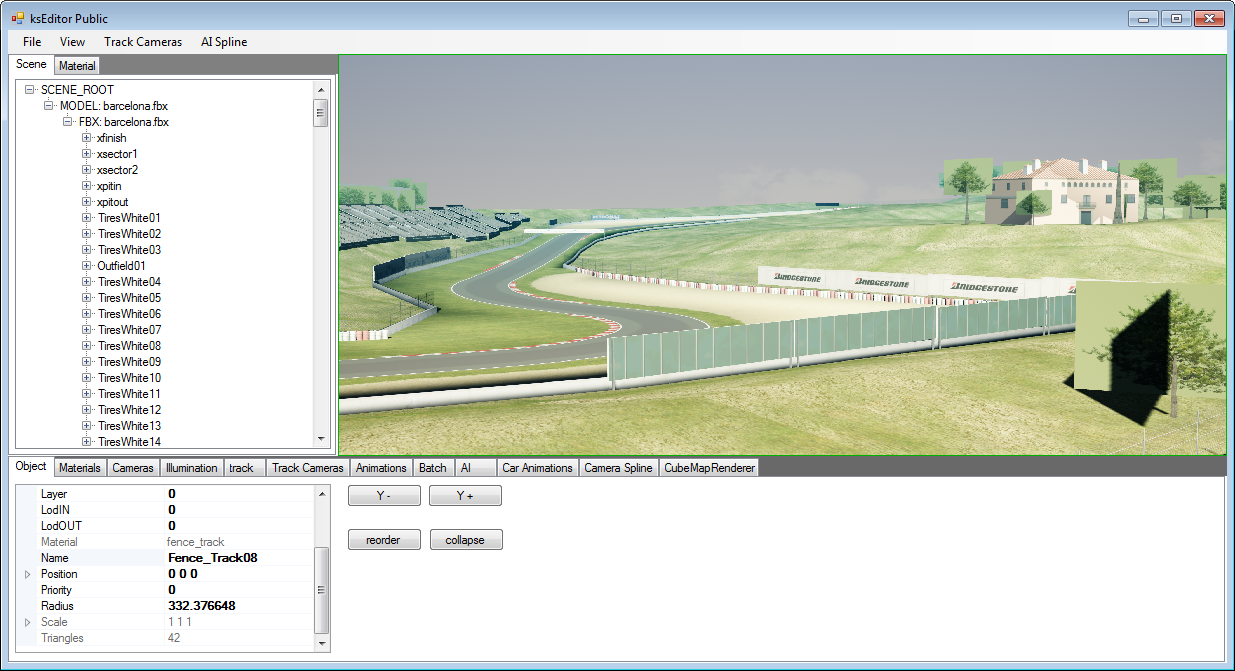 The FBX Plugins can be found at the downloads page.

New: Assetto Corsa Export plugin added.  Geometry, materials and shaders are all exported allowing tracks to be edited and created. Please note that at present car models do not work.

New: Assetto Corsa import supports shaders and their associated variables.  The Assetto Corsa plugins also ensure that the Ks Shaders are available in the Edit Material Pane. Note that 3DSimED does not have the vertex and pixel shaders to render these shaders correctly.

New: The Collada Import Plugin can now read skeletal character animation. At present the transforms must be defined by matrixes and not axis angle, and there is a limit of 40 bones.

New: Collada Export gives the options of exporting multiple texture channels. Nodes are now named according to the object associated.

New: A function Export->Export RF2 Anm allows a character animation to be saved to rF2 format. This is intended to be used with the Collada Import of animations.

New: Material Edit Pane allows user variables associated with imported shader data to be modified. At present Assetto Corsa is the only sim with this support.

Enhanced: Memory handling has been improved it is easier to edit large models than before.

Enhanced. Collada Import no longer allows materials to share vertices, this helps with the editing of multi-channel texture coordinates.

Enhanced. A much large range of replacement tokens is allowed when importing ISI car models.

There was a bug with the group edit of objects with Set Tag which caused all modified objects to be assigned the same instance name.

Edit Paste Vertices could cause an exception error.

Very small triangles could not be selected.

A new version of the Collada Import Plugin, for 3DSimED 3.0s, supports multiple texture channels. The updated Import plugin for Collada .DAE files can be found  at the downloads page.

New: The Primitive Box function has the option to generate a bounding box surrounding the Editable Face Data.

Enhanced. The pivot point is always saved to a .GMT when exporting a single model for rFactor, rF2, and the other ISI formats. When saving a scene the pivot point will only be saved if the Moveable attribute is set for the object.

Enhanced. The Group Instance Edit pane has a copy function to place the group on the clipboard as an object.

Undo could take too many steps back when used from any of the edit panes.

On the  Object Instance Edit pane the shadow options presented did not update when the Object Shadow option was changed.

An object with scaling not set to 1.0 would be incorrectly positioned if it had a non-zero pivot point.

The magenta colour of the ‘missing texture map’ rendering has been altered to prevent the Fresnel shaders rendering bright white if the fresnel texture is missing.

New. The view roll angle can now be set, the tilt of a mouse wheel can be used to change the angle.

New. For Objects with multiple animations the rendered animation can now be selected, this is particularly useful with objects such as corner workers.

New. Objects now have an Instance Name, this is useful when editing .scn files for rFactor and rF2.

New. The Import file dialog and many other file open dialogs now have a recent folders button.

New. Edit->Object By Name now shows the Object tree and allows selection of an Object at any branch of that tree.

New. On the Object Instance Edit pane the memory recall (MR) XYZ will update the Pivot Point if the X,Y, or Z Pivot edit box is selected.

New. Dirt ShowDown tracks and cars can now be imported.

New. Assetto Corsa tracks and cars can be imported with a new plugin.

New. Ferrari Virtual Academy 2010 tracks cars can be imported with a new plugin.

Enhanced. Selection of geometry is quicker, please note this is at the expense of frame-rate but in everyday use very quick geometry selection is probably more important than high frame-rates.

The view could disappear when looking directly down or up.

The view was not correctly panned by the keyboard arrow keys.

When using Primitives->Add Object new textures were not rendered.

A mistake in the tire vertex shader could cause tires to be animated.

The Collada Export Plugin now creates .DAE files which can be imported by Bob The Track Builder XPacker.

An Import plugin for Ferrari Virtual Academy 2010  is now available for 3DSimED3. It is part of the release package which can be found at the downloads page. 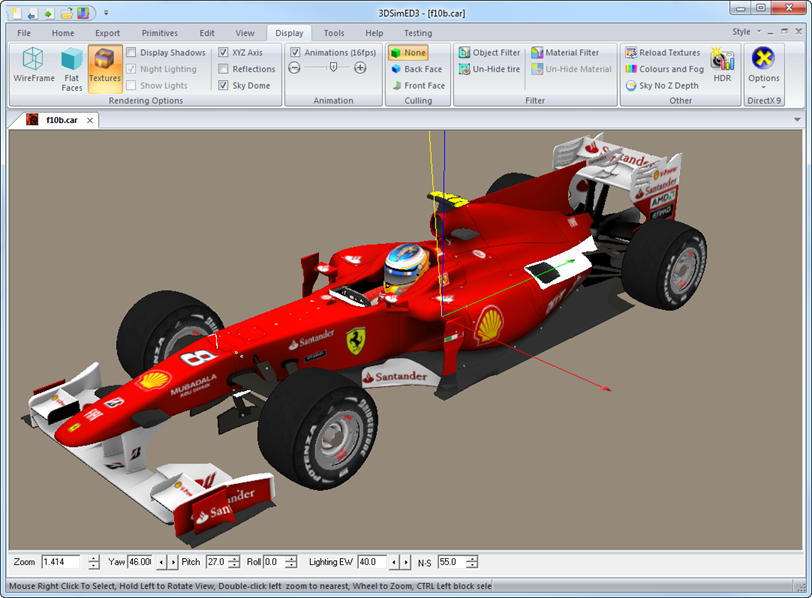 The next release of 3DSimED3 will include the ability to import from Dirt ShowDown. 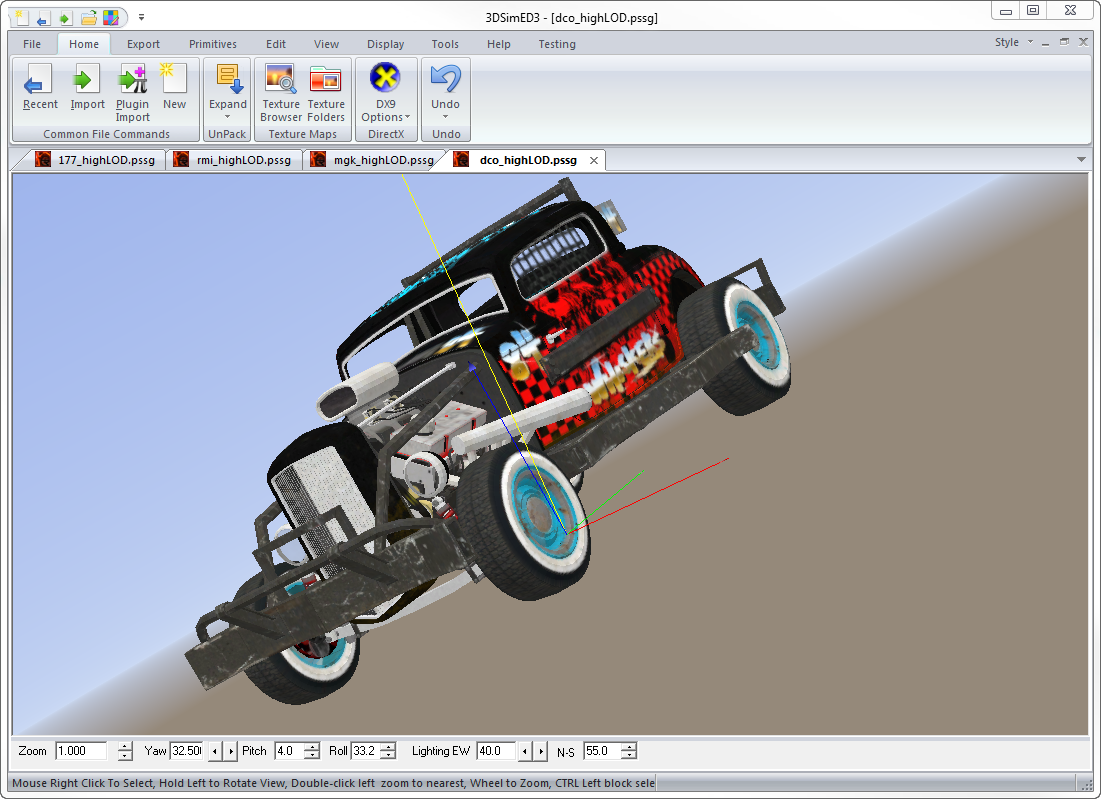